Tom was living his dream; radio! Building towers or stations, broadcasting, managing, and ownership all held his interest. Radio is a fast paced business which left Tom with little time for other ventures, until the day he met wife, Cheryl. Cheryl grew up driving tractors and caring for livestock. Her favorite days involved landscaping and everything in the out of doors. She dreamt of one day building a cabin in the Blue Mountains. He wore a suit and she preferred her straw farm hat. These differences in lifestyles and backgrounds made one ponder “what did they have in common?” The answer to that begins with their mutual fascination with world travel and a love of great wine!

The Hodgins launched their new “Smooth Jazz 101.9 FM” radio station; an instant success in the wine corridor of South East Washington. The 1980’s radio show “The Hiney Winery” also proved to be another perfect marriage with the new wine venture the Hodgins were embarking. Thus the link with radio and wine started to develop. Surrounded by friends and family who were already active in the wine industry, the two were quickly captivated with every aspect of the business. In 2000, Tom and Cheryl joined with friends and invested in the Ash Hollow Vineyard located 17 miles west of Walla Walla. From this point, the Hodgins were truly aware of their passion of transforming vine to wine. The distinction of the fruit in the Walla Walla AVA was an automatic promotional point for tourism, right down Tom’s radio alley. Chuck Reiniger, Jay Tucker, the Nelsons, and the Hairs were just a few in this new group all forging new careers as wine makers, vineyard managers and most importantly all were wine lovers. The following year Cheryl’s father (Chuck Nelson) planted the first acres, which were later known as Skylite Vineyards. Nelson could not resist having his own piece of the new AVA. As in so many wonderful wine stories, this was a family project from day one and continued to evolve. Having traveled the world, sampling wines from the southern hemisphere and several continents, the Hodgins learned to further appreciate the Walla Walla wines. But more than the distinction of the valley wines became apparent; the unique experience and brotherhood within the industry was and still is intoxicating. Before they knew it their hat was in the ring. In 2003, they began searching for another family member: a wine maker that held the same values, had pride in Walla Walla as well as shared a desire and dedication to crafting fine wine. The Hodgins planted their principle on producing only small quantities of distinguished handcrafted wines for wine lovers. Tom found his new addition to the family in Robert Smasne. The three set out to choose fruit, communicate their united philosophy of wine making and develop what you now enjoy as the fine wines of Skylite Cellars.

No, cellars do not have skylights. In fact the new Skylite Cellars Winery is not a typical cave cellar. So how did it all come about? You have already met Chuck, Cheryl’s father. He and wife Jean have been world travelers for over six decades and that certainly led to an overfilled home. Art, artifacts, collectibles, distinctive treasures and more were beginning to crowd the Nelson’s lovely home. Tom, Cheryl and Chuck went real-estate shopping in downtown Walla Walla in search of a suitable place for the Nelsons to display these marvelous items. The historic 1908 Quinn building on North 2nd Ave had promising possibilities but was certainly a scary prospect. Formerly the building had been divided into 19 tiny rooms and with an artificially dropped ceiling about 6 ½ feet from the main floor! Chuck and family began to renovate the building themselves, starting with tearing down walls, propping up ceilings and stripping the walls back to their original brick foundation. Cheryl insisted that the upstairs area be further enlarged, so one day while Chuck was out for lunch she decided to take the initiative, took hold of a saw and began to have her way. To everyone’s amazement, century old sky lights were uncovered. The entire roof was a magnificent grouping of antique hinged windows which allowed glorious natural light to pour in. What more could a gallery hope for? If you are following the evolution: first came the Skylite Gallery, then the family vineyard was christened Skylite, and lastly came the winery: Skylite Cellars. The Hodgins have plans to expand the case goods building making use of an arched roof creating a cave; there will be a skylight in this cave! 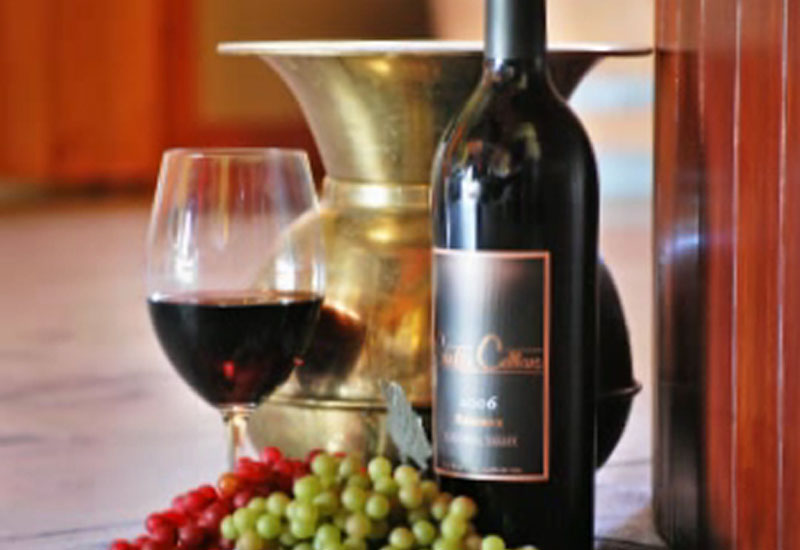